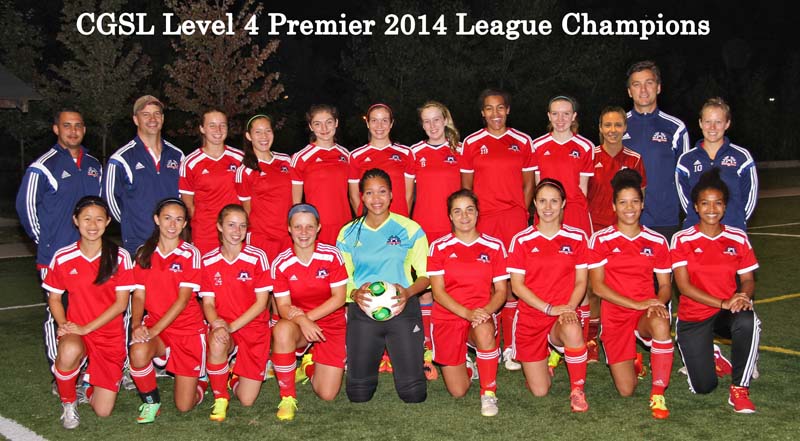 Congratulations to the U16 Girls for their successful year. We thank the players, the coaches and all the parents for their support.
Ottawa Finalists, Robbie – Champions & Rochester – Champions

U12 Boys Rangers. CESL LEAGUE CHAMPS. Other season highlights – Ottawa Boys Kickin’ It in the Capital tournament runner up. 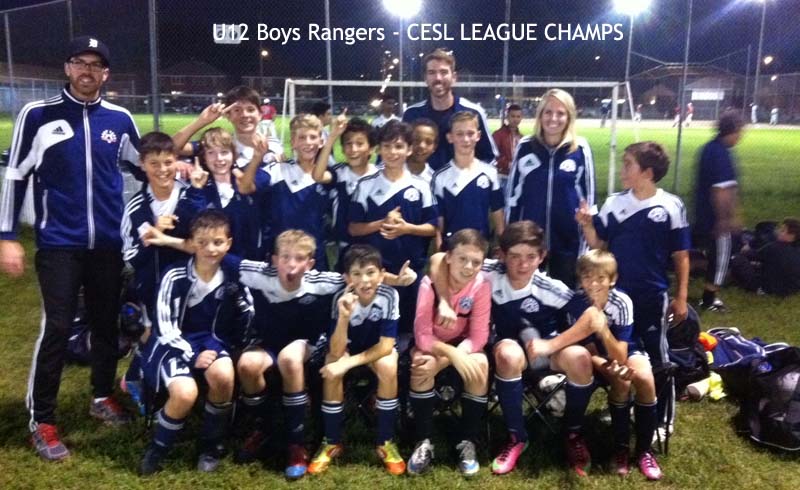 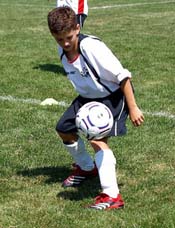 Manuel Aparicio, an East York Dragans player has been signed by Toronto F.C. and immediately was named to the National Under 18 team. Toronto F.C. announced that the club has signed KIA Toronto F. C. Academy midfielder Manuel Aparicio as a Homegrown Player. “We’re very pleased to have Manuel graduate from our Academy to our first team. He’s a terrific young man and talented player,” said Toronto F.C. President and General Manager Kevin Payne. “His signing is further evidence of the quality of our Academy.” Aparicio was recently named to Canada’s U-18 National side that will compete in 2013 COTIF U-20 Tournament later this month in l’Alcúdia, Spain.

Congratulations to the coaches and the players of the U14 Boys Knights for their great performance at the CESL Cup final well done everyone. 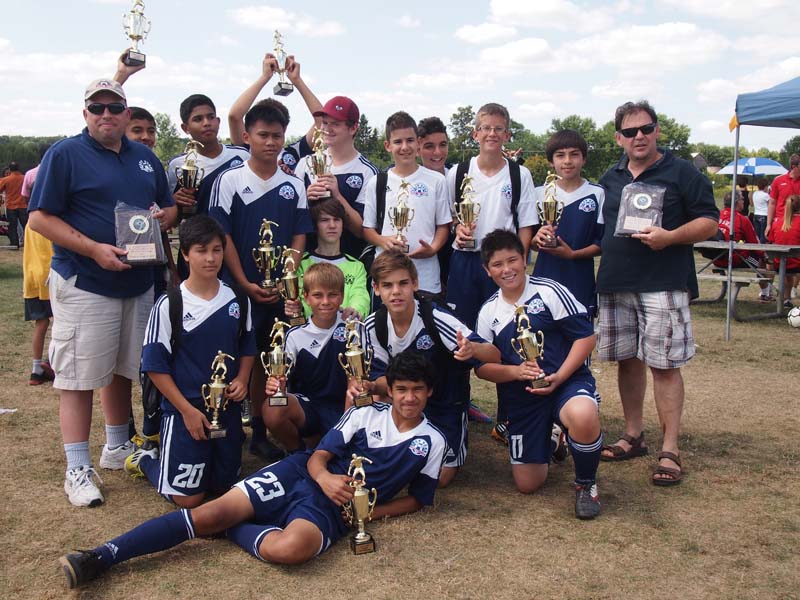 Congratulations to our U15 Girls Blue Devils for winning the West Rouge, Belleville and Thornhill tournaments! 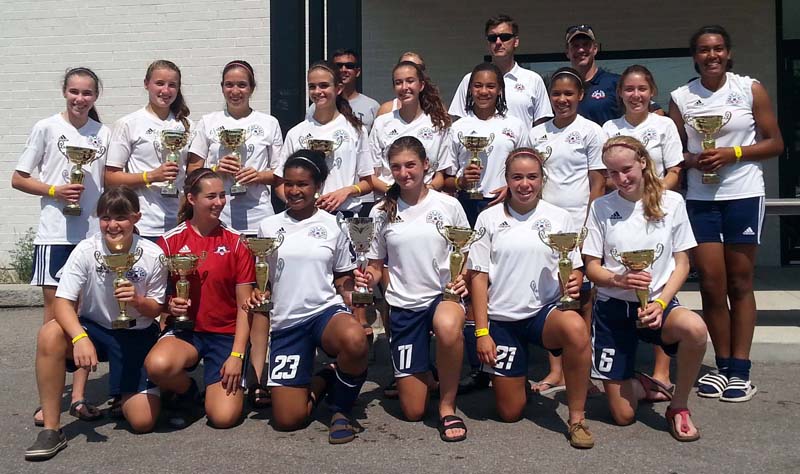 Congratulations to the U18 Boys 2013 Robbie Champions!!! Well done and a big thanks to the team coaches, Bert Lobo and Miguel DeSousa, for their hard work with the team. 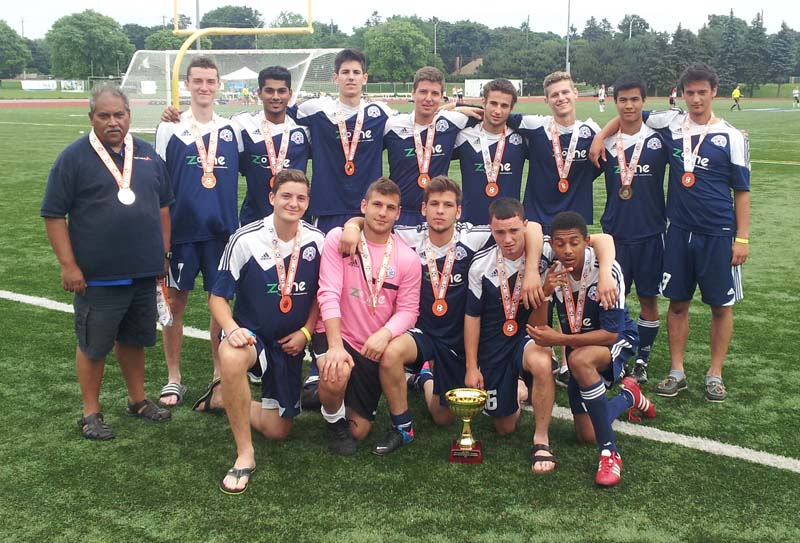 Congratulations to all players and coaches U9 Development Team for winning the Albert Campbell Tournament. They were 1st out of 24 teams. Well done boys, this was great! Thank you, to all for their hard work developing this team and our Technical Director for guiding our coaches and players in the right direction. 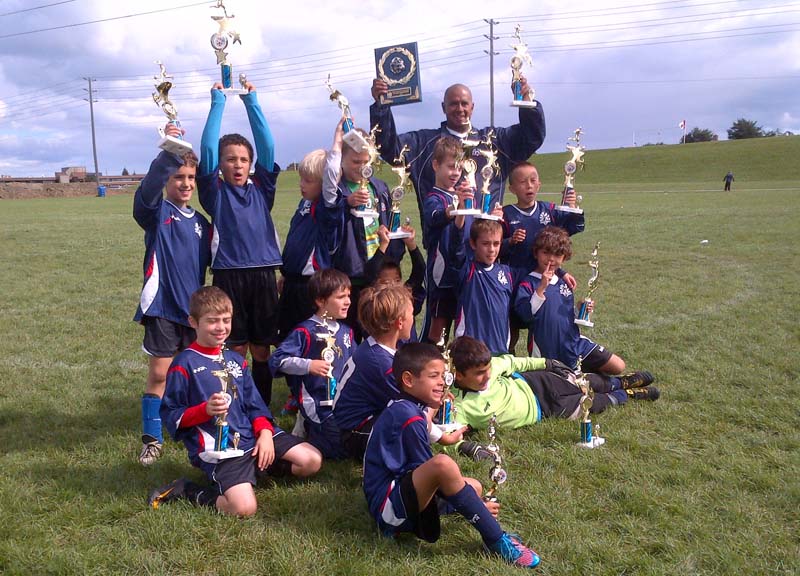 The East York Gunners have clinched top spot in the CSL U14 L4P with a 5-2 win against Weston at Dieppe Park. They are currently undefeated with 8 wins and 3 draws in 11 matches. Congrats to the boys for all their hard work this season! Good luck in CSL L3 next season! 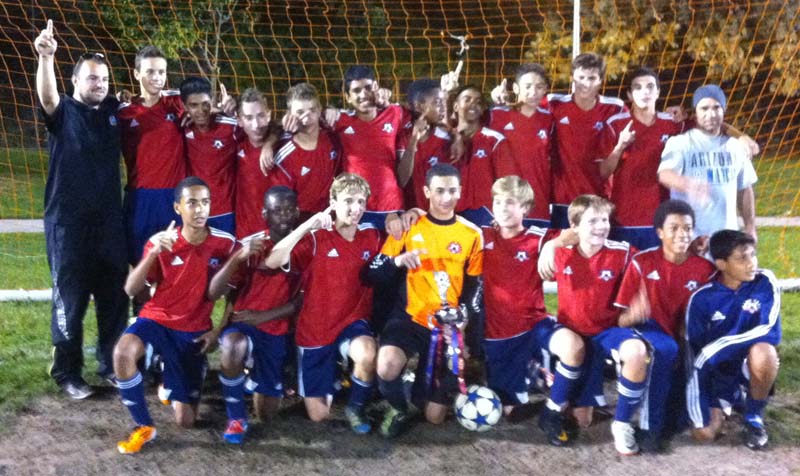 EYSC U18 Boys All-Stars took first at the North Mississauga tournament this weekend. This is the third first place tournament finish for the team in three tourneys! See the Mississauga Tournament and the Simcoe Tournament Below. 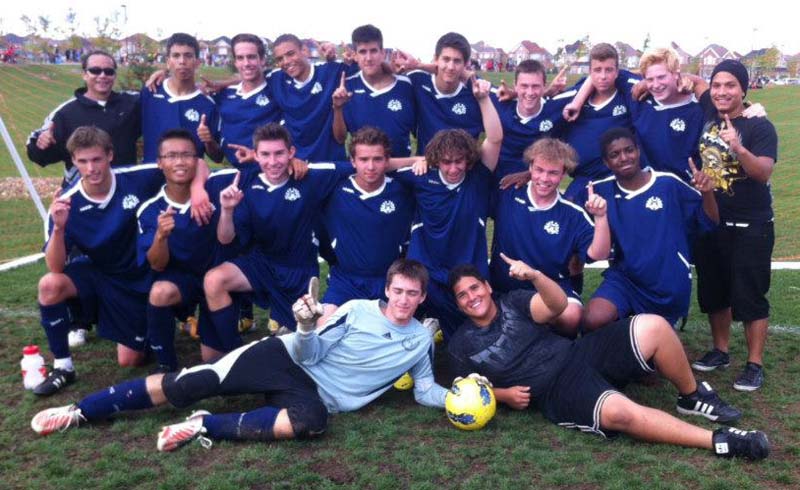 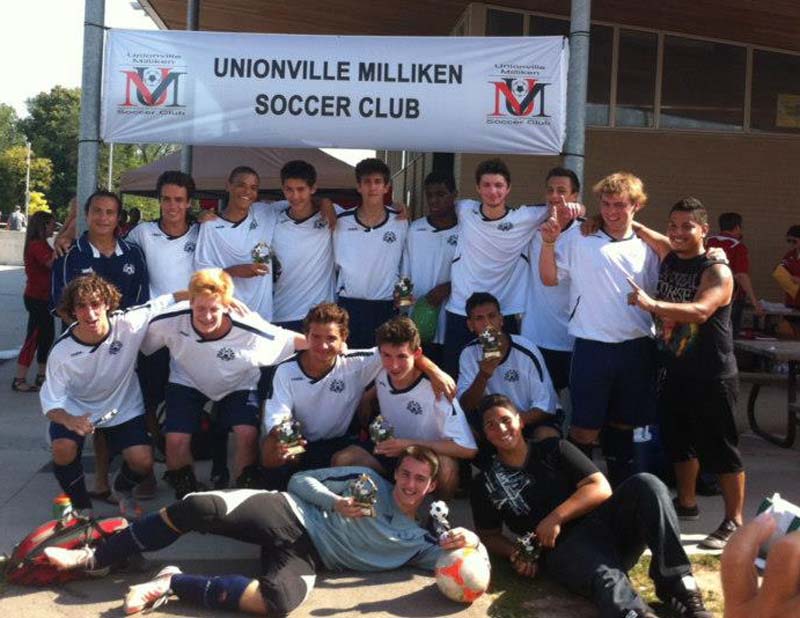 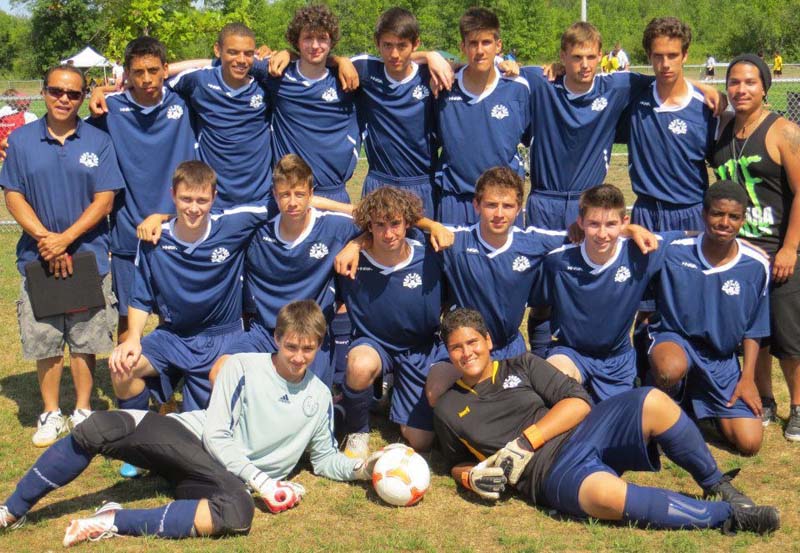 Congratulations to U14 boys team the Gunners for Winning the Grape & Wine Tournament in St. Catharines. The East York Gunners are champions of the Grape & Wine Youth Cup in St. Catharines. The boys played 6 games winning all games scoring 31 goals and only conceding 2. The boys played through some wet field conditions and managed to display some good possession soccer despite the field. Their focus now returns to their league where they are hoping to secure top spot with two big games to be played this week. 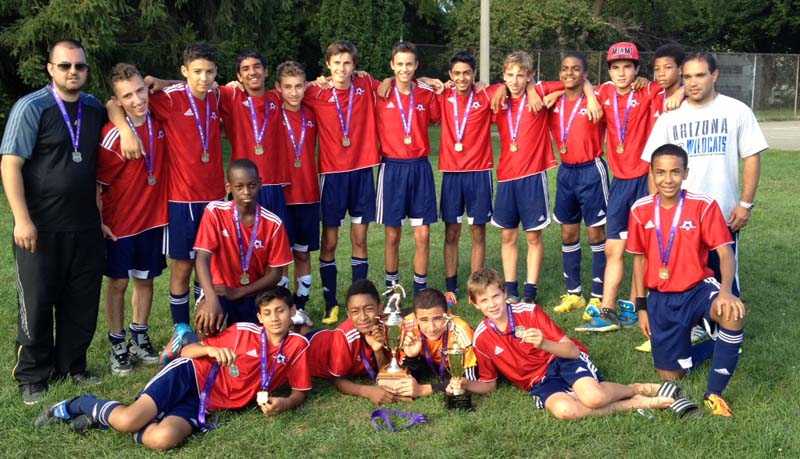 Congratulations to the Under 10 Boys All Stars – Finalists in the Barrie Soccer Tournament. 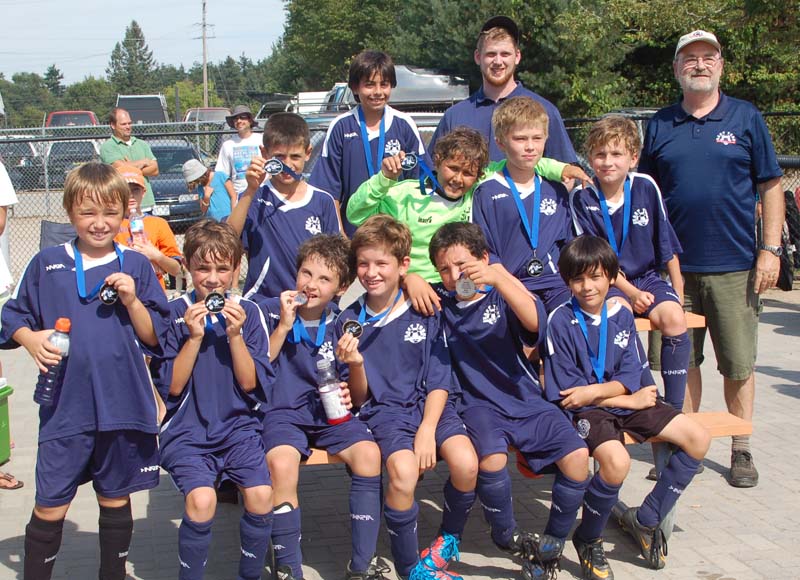 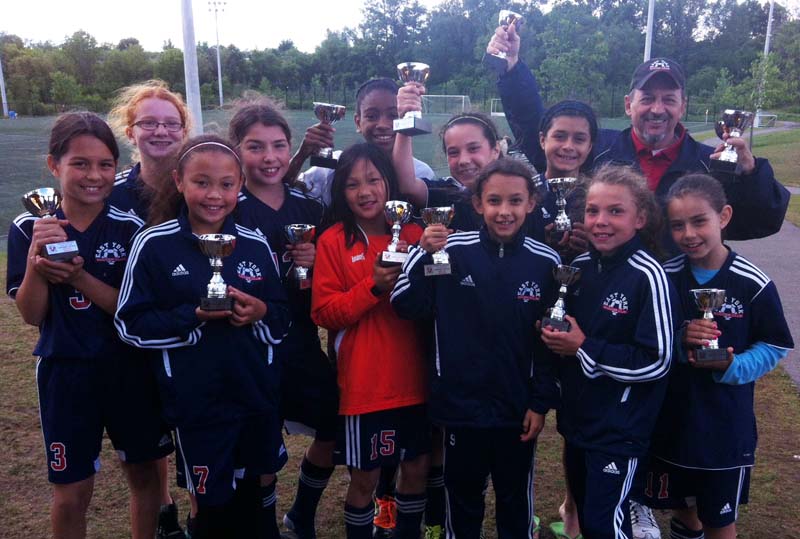 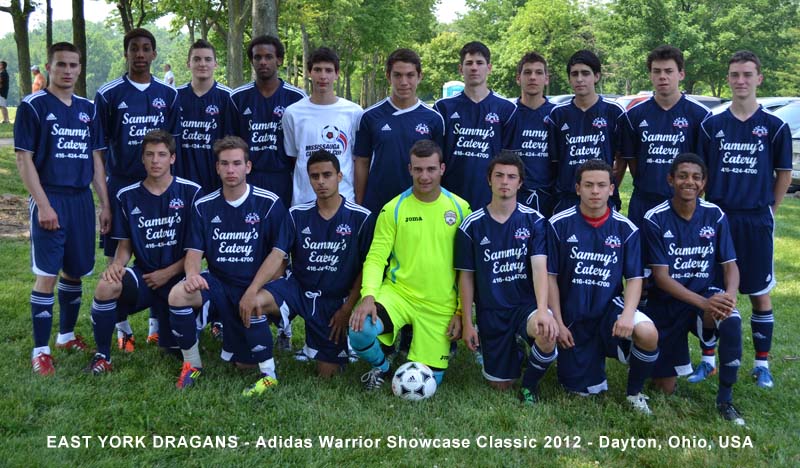 Congratulations to the U16 Heat Boys Team Coaches and players – Champions of the Oshawa tournament on.the weekend of May 12-13. 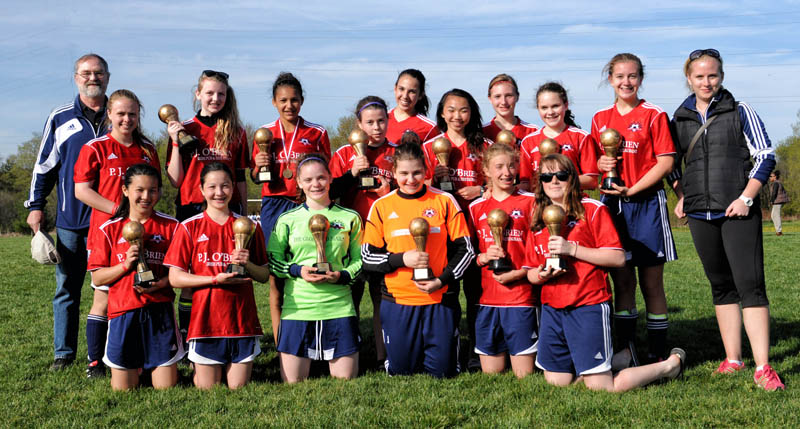 East York Gunners U14 Boys were Champions in the OSA Holiday Tournament. The East York Gunners played in an all day tournament at the OSA Centre in Vaughan on Thursday December 29th. They breezed through their first two matches winning 5-0 vs. Clarkson Comets and 6-1 vs. Wexford Gunners and now only needing a tie in their final match to advance to the finals. This was not an easy task as the Ajax FC squad stood in their way. The East York Gunners were also playing without a goalie as their keeper was hurt in the second match and backup keeper was away on holidays. Despite all that, East York played a very good match and actually had more chances to score than the Ajax side in a 0-0 draw. The Gunners advanced to the finals where they met another very talented side in Whitby. The Gunners pulled it out again with a great header finish with 15 minutes left and East York went on to become champions! 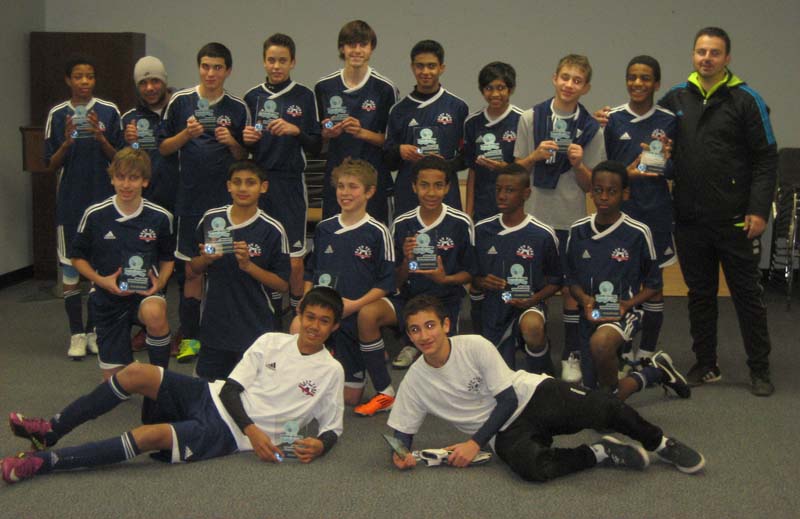 2002 Girls Development Team for participating in their first Tournament in Whitby.

Congratulation to our U13 Girls Blue Devils 2011 Champions. 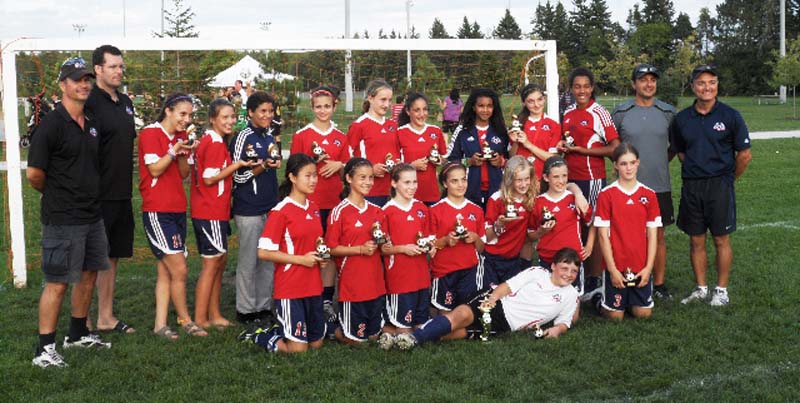 Congratulations to our U10 Girls Team and their coaches for their excellent 2011 season. 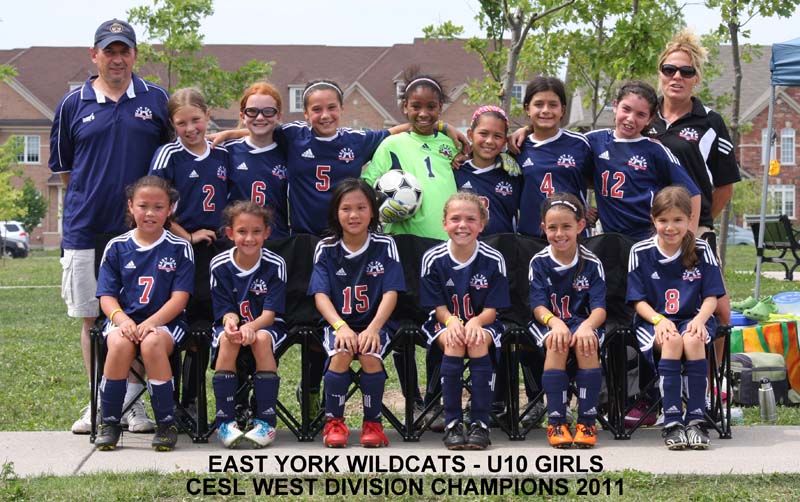 U18 Girls Pumaz team for finshing second in the 2010 and 2011 seasons in their CGSL League. 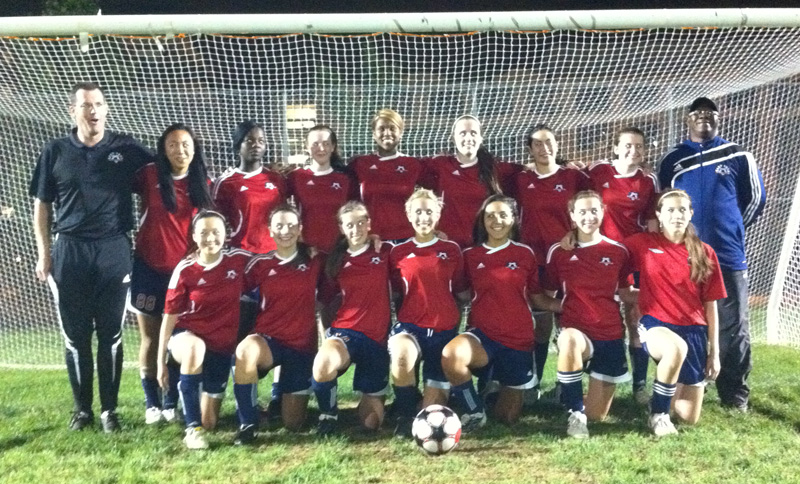 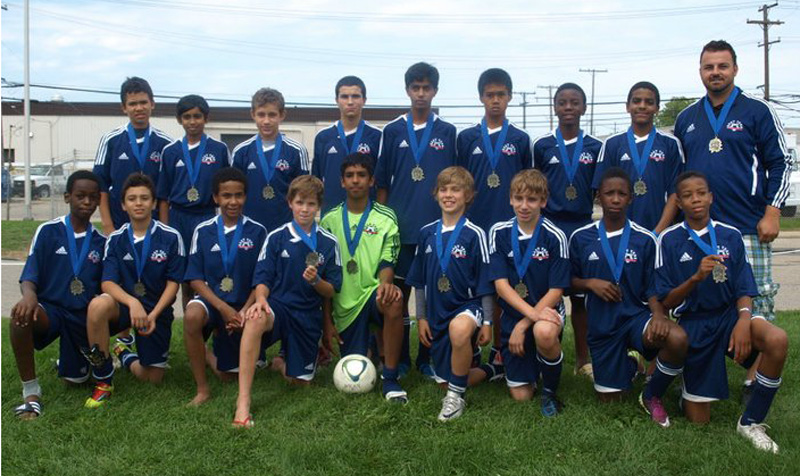 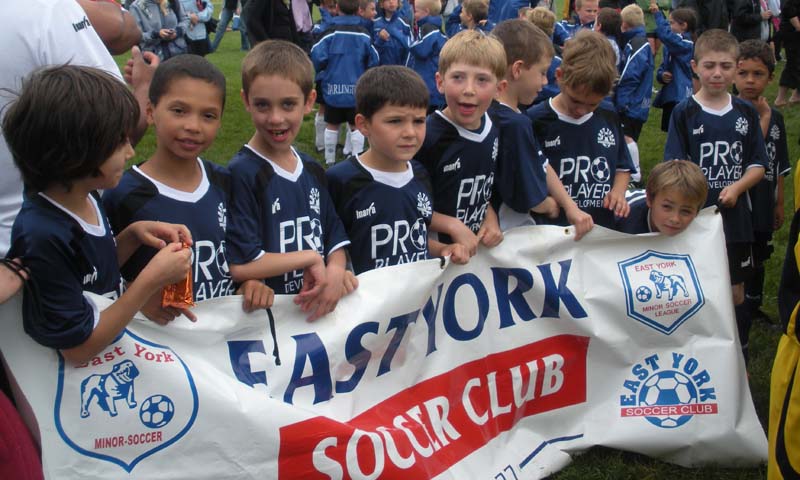 Congratulations to our U10 Girls All-Star team for their excellent play at the 2011 Oshawa Invitational. 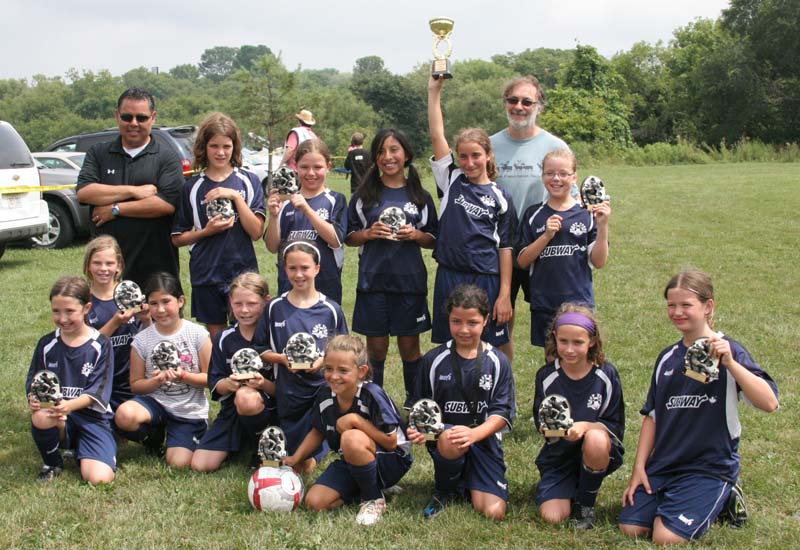 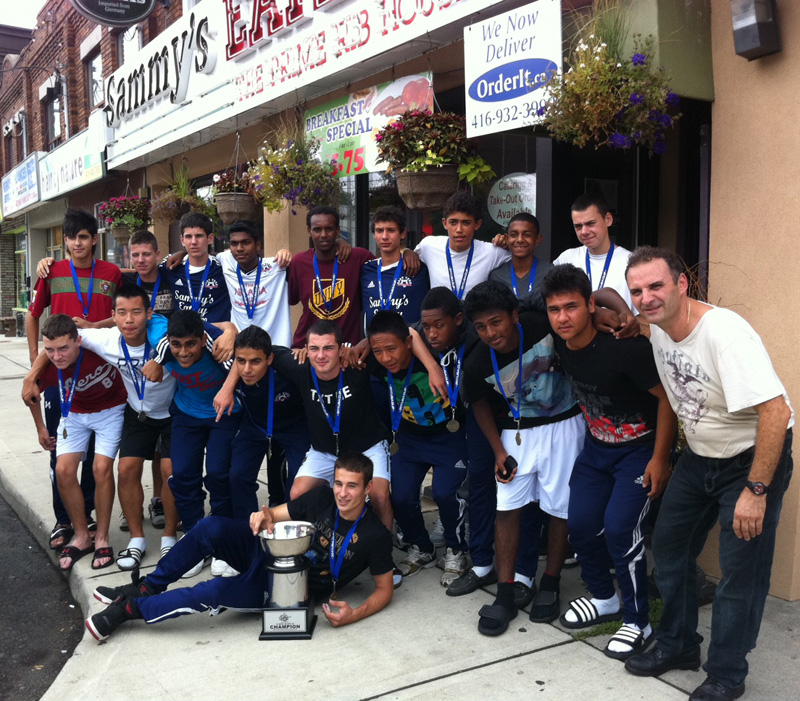 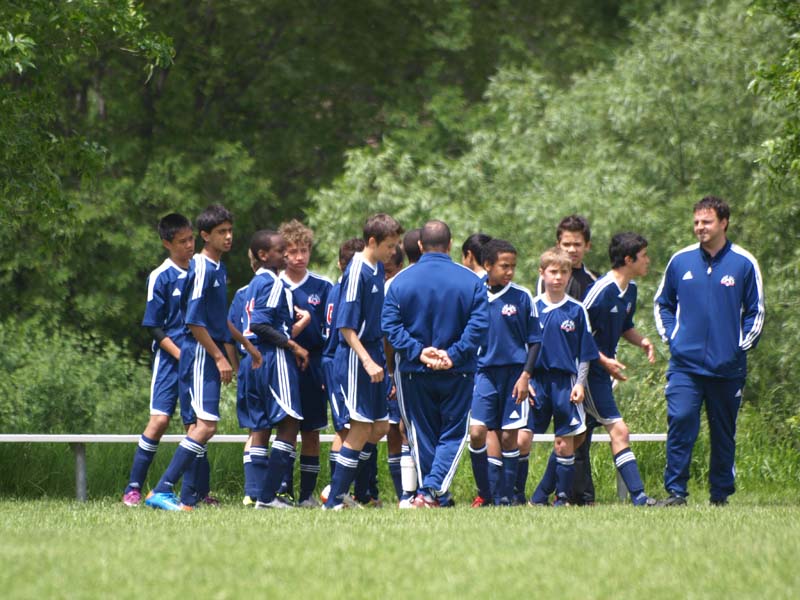 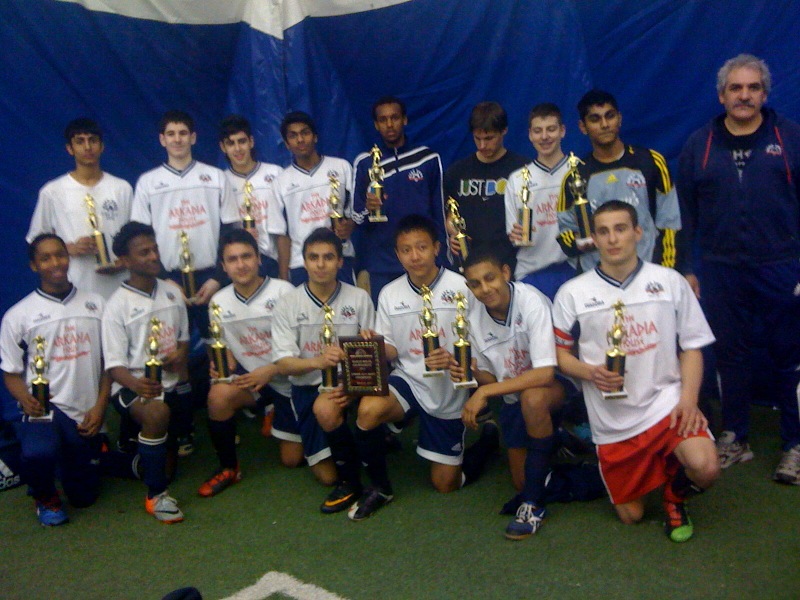 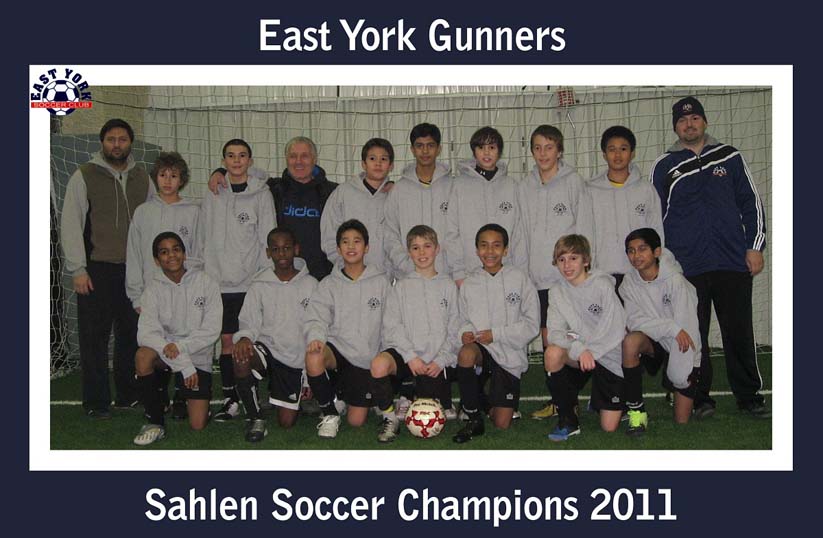 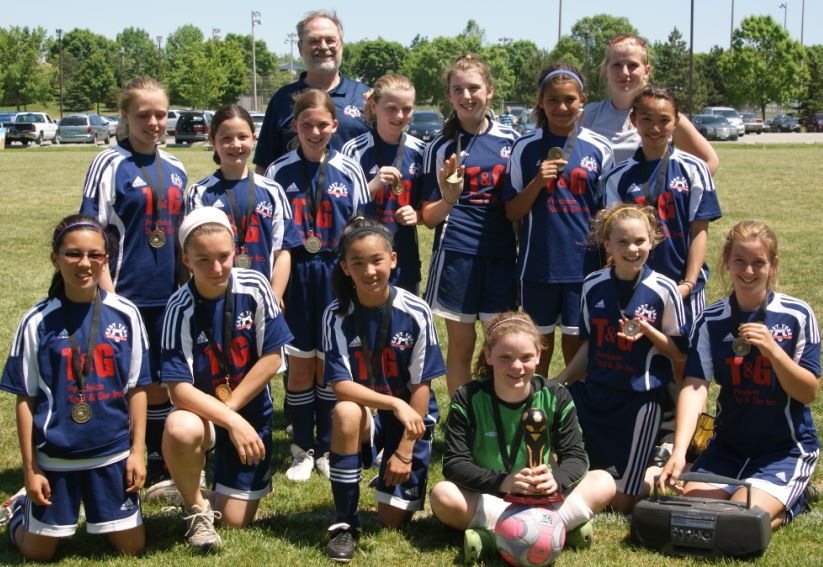 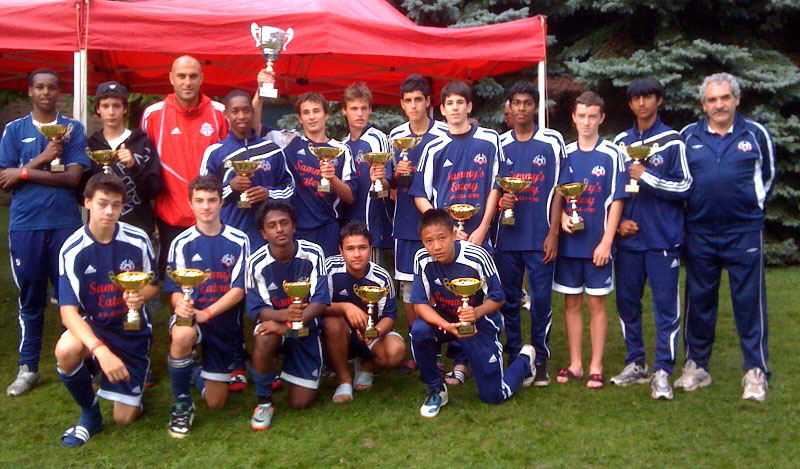 Boys Under 18
East York Komets
Congratulations in 2006 to coach Lucky Boothe and his under 18 Ontario Champion Komets and their 4th place win in the national club championships in Laval, Quebec